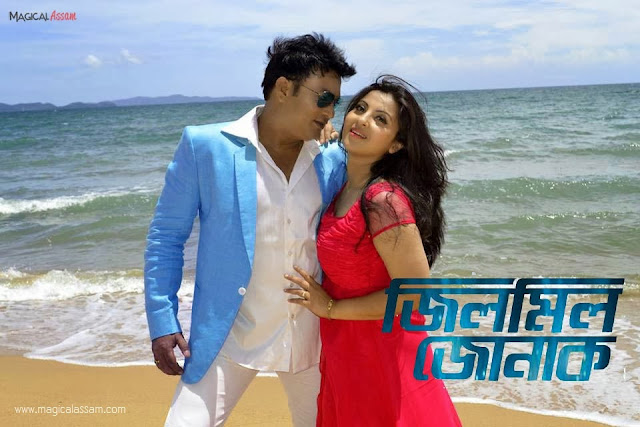 For last several months Sibanan Boruah’s upcoming flick “Jilmil Jonak” has been occupied news headlines unlike a normal Assamese movie for various reason. According to times of india this film is aimed at bringing back the audience to theatres and expand the market to boost the ailing industry. After his first movie “Hiyar Daponat Tumarei Sobi” director Sibanan Baruah has entered some unique element in this film.
B Srikanth, a sought after name in the Chennai film industry and whose skills have been used in blockbusters like ‘Singham’, ‘Dabang’ and other Tamil films, was roped in for ‘Jilmil Jonak’ as the fight director. Sriknath is known for his high-voltage and explosive stunt scenes and accompanying him was his 16-member team that directed Assamese superstar Jatin Bora and other actors.
After ‘Ahir Bhairav’, the first Assamese film to be shot entirely in England, ‘Jilmil Jonak’ is another film made after a gap of many years which has some of its sequences shot in Thailand.
Jatin Bora is playing a character who is based in Thailand and a successful businessman. His family gets to know about his whereabouts and how it changes the plot. He goes there for a challenge to do something in his life. While Aakashdeep is playing a negative role.
The budget of this movie is Rs 60 lakh which can be exceed at the time of post production. The production house Daijee Cine Production is worried about this fact as the profit returns for Assamese films are supposedly less and even uncertain in current market scenario.
“It is not just the foreign locations, a high-ranking fight director from Bollywood and a Red Epic camera have also been used. This camera is advanced and some Hollywood films have been shot using this. The film is an attempt to get back the audience to theatres and we have also shot football matches to make the sport popular once again,” said Daisy Gogoi, producer , in an interview with TOI.
“We have shot a song which is a dream sequence at Pattaya beach and also some sequences there. We have also shot on board of the Ocean Dream Cruise Ship. It is quite challenging to shoot abroad as there are financial and other factors. We also had to pay permission fees as some locations are bit expansive than the rest. For the action sequences Srikanth and his team brought gun props and other items,” said Sibanan Boruah, director ‘Jilmil Jonak’.

Other Details about Jilmil Jonak