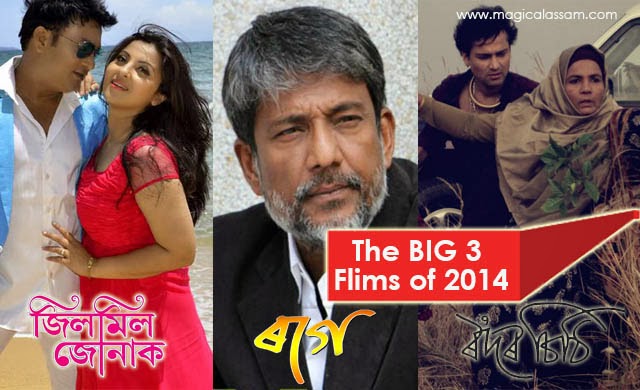 The year 2014 is expected to be the most wonderful year for Assamese Film Industry.We have some big projects to be knocked the screen.People are eagerly awaiting  for these. Though there are numbers of movies lined up for the upcoming year but there are special three movies that we are going to talk about.
1. Jilmil Jonak
This multi starrer movie is directed by Sibanan Boruah. “Jilmil Jonak”  is the second movie by the director after “Hiyar Daponat Tumarei Sobi”. This movie has got all the elements to be called a “Hit”, form the Foreign location romance to South Indian style fight scene. B Srikanth who is known for the great action scene for “Singham”, “Dabang” and various other south Indian movies is the Action Director of this Movie. Aakaashdeep, the popular actor is playing a Negative Role . The film is leading by Superstar Jatin Bora. The other Actors who has given their best for this flick are Shyamontika , Nishita Goswami, Raag Oinitam and  Jupitpra Bhuyan. You can watch the pictures and know more about this upcoming Assamese movie Jilmil Jonak
2. Rodor Sithi
Directed by Baharul Islam, this movie is going to hit the theatres by the middle of January. The subject matter of this movie is slightly different what we usually find in Assamese Cinema. This movie has an Internationally acclaimed Actor Adil Hussain. Rodor Sithi is the  debut movie of famous Indian singer, composer Angarag Papon Mahanta. Papon after the finishing of the shoot actually said that he always wanted to be an Actor. The another factor that create a difference in the Movie is its Music Director who is also playing a notable  character, he is none other than Zubeen Garg. Know more about this upcoming Assamese Film Rodor Sithi
3. Raag – The Rhythm of Love
“Raag: the rhythm of Love” is an another most awaited movie directed by Rajni Basumatary .  This film has featured Adil Hussain, Zerifa Wahid and Kapil Bora in the lead roles. Its a story of a charming Hindustani singer and a gifted painter, a corporate executive and an Opera flutist. The entire film has been shot lavishly in various locations in Delhi. Its music is completely mesmerising and upbeat. Many of the songs have a contemporary feel, but are based on traditional Indian Classical music.
Do you want to Promote your Film and Music Video ?!!
Do you have any News regarding Assamese Entertainment Industry?!!
Do you want to contribute as a Guest Blogger?!!
If Yes the then Press the Following Button