In Conversation with Rima Das as her film ‘Man with the Binoculars’ premieres at the Tallinn Black Nights Festival!

Rima Das – an actor turned writer/director, a rare combination of a spiritual soul and a beautiful smile!

Her debut film Man with the Binoculars : Antardrishti was recently been selected, screened and very much appreciated in this year’s Mumbai Film Festival!

In Conversation with Rima Das as she talks about her journey as a filmmaker!

Your debut film ‘Man with the Binoculars’, originally titled as ‘Antardrishti’ recently got selected in MAMI and it was very much appreciated by the audience! What do you feel?

I am very happy!

Actually my film was earlier screened at Cannes this year and it recently got officially selected at Tallinn Black Nights Film Festivaltoo!

And being a regional film (it is in Assamese) 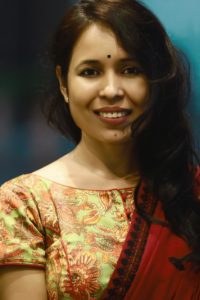 while I was writing the script, I was sure that may be only 30% people will like it. Because ‘silence’ is one of the main characters in the film and I didn’t know if it will connect to the audience. Though I didn’t have any particular audience in mind while making it but then again I was scared; specially in MAMI being the first public screening in India. But people really loved it, even the youngsters liked it. That really encouraged me!

And now I can think about the release of the film. I feel a little relaxed (laughs).

Wow! Silence being the protagonist of the film – that’s really interesting! Tell me how did you come up with the story of your film?

One day at a friend’s place, I saw a pair of binoculars. He told me he was planning to gift it to his retired father. That intrigued me. I wondered what the old man would do with the binoculars. What would he look into, what would be see? And that became the primary idea of my film, and then there are four different love stories also played in the film.

And yes, Silence – actually the films that I could really relate to are those which have more of silent moments you know. Then in Mumbai there is so much noise, I feel people need some time to 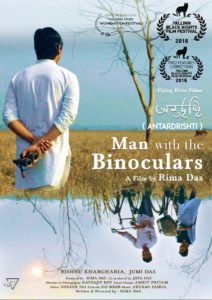 breathe, and through my cinema I want people to understand the beauty of silence. Personally silence always relaxes me.

So from being an actor to a filmmaker – how did that happen?

While into acting I was always interested in direction. Then I got to know about the 5D DSLR camera, a small wonder with which I can do all my experiments.

Actually in 2009 I made my first short film, ‘Pratha’. It was selected in Chicago Short Film Festival and some other festivals as well. So that way I got some confidence. I understood that I just needed to tell my story, bought a 5D and in the next one year I did almost ten short films and music videos. I kept on experimenting.

But then for my first feature I needed time, and to avoid any external pressure I didn’t want to involve anyone else. So this film is self-produced. I realised that I needed a good cinematographer and lot of time – then only my vision can truly come out in my film. My film is more of a visual thing – it’s a visual poetry!

I wrote the script for almost one and half years while in Mumbai. Then I shifted to Assam and within eleven days I fixed all casting, costumes, location, props everything. Thanks to a bunch of energetic youngsters from my village and my younger cousin-sister Mallika Das who were helping me with all 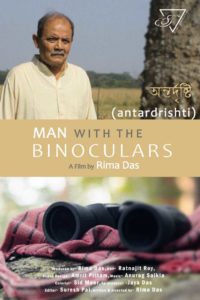 these. Only my cinematographer and the main actor were professionals. Other than that everyone was inexperienced, just helping me out.

My protagonist is working for more than 40 years, he is a National award winner actor! So again it was a challenge for me to direct somebody so experienced along with all the new faces. But I was very sure that I will do only two or three scenes a day, and there were lots of retakes also specially for the long takes.

You also acted in the film right?

Yes, but I don’t think it was a very good decision, probably the only thing I regret while making the film (Laughs). I feel I could have concentrated more on direction but at the time it was also difficult to get some other actress, so I had to do it.

But then also everything went perfect and you have made such a great film! Now tell me something about yourself, where are you from?

See I belong from a very small town in Assam. I grew up watching a bit of television but then again my father being a teacher – it was always like studies come first. I wasn’t aware of much of cinema, 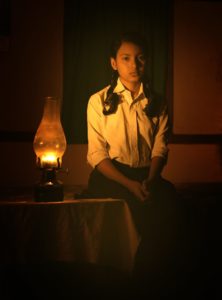 But from my childhood I was interested in acting, even in school and college I did plays and all. Then I decided to come to Mumbai and try out acting as a career. But being from North East my Hindi and English were not so good; I was always the best in my hometown but in Mumbai it was very difficult – I got insecure and went into depression.

But one thing that happened good in Mumbai was that I got exposure to world cinema and I got addicted to them. And then I wanted to create, I think that is when the transition from an actor to director happened for me.

And what are your inspirations, any particular films or film makers you particularly admire?

See I like to watch all kinds of films, from Tarantino to Bergman – everything. But then again Iranian films, films of Wong Kar-Wai. Oh and then Terrence Malick – I somehow connect with him more because may be I am a spiritual person and so …  I also like to 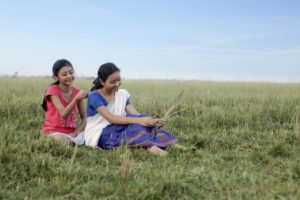 know what is life and all these things you know.

Even Pather Panchali by Ray inspired me a lot!

Even while working on my second film ‘Village Rockstars‘, a story inspired by incidents from my own rural upbringing, I keep taking inspiration from the these great film makers.

All the best for your second film! It all sounds like an awesome journey Rima, congratulations once again!

Thank you so much. Ya, now sitting here and looking back it feels amazing, it’s like a miracle! (laughs).